I know it’s been a while since I shared a horsey post. We’ve been busy and had some ups and down’s. It’s come down to a stay-cation this year while we finish working with Sonny Boy so his feet can heal. I’ve been a worried horse mum. I didn’t think I’d be dealing with restricted diets and a case of laminitis. Sugar has turned out to be too much for Sonny. We reseeded and fertilized the pasture this year. Combine that with all the rain we had and the pasture was too lush as well. So no sweet feed and no treats. The critters are on crimped oats only, last years hay & limited pasture to get him under control.

We tilled up the ground behind and beside the shelter so the dirt was soft on his sore feet. Patrick laid rubber mats down inside the shelter. We’re keeping it sparkling clean cause I’m paranoid about infection or anything else that could happen. He’s been doing good coming in to week seven. Week four about gave me a heart attack.

At week four we had a cold snap and Sonny & Chick were feeling frisky! Early in the morning Chick started rearing up and wanting to play. Well Sonny was not to be out done. He bounced up and down off the ground like a jack rabbit kicking his back legs in the air behind him. He was on the tilled dirt, yay. Then he reared….

I’m off to the side with my hands out screaming NO in slow motion. My imagination kicked in and I could see the horrible train wreck of his right front foot just being driven into the ground when he landed and him crumpling with it! Not exciting; what my brain saw.

What my eyes saw was Sonny rearing up, then coming back down just as fast and then he stops. I have no clue how he pulled himself back, but at the halfway mark he does a slow motion decent and lands on his left foot. He immediately whipped his head around to look at me as if to say; “I didn’t land on it, Mum!” OMG! We’re both a mess.

Chick has been stoically handling all this like a real lady. She’s been standing beside him just like he stood beside her when she cut her leg last winter. Things are going good. Week seven is behind us and week eight is under way. Sonny’s exercise routine has been ramped up and he’s doing good. Of course I got yelled at as ‘I was disrupting the exercise routine and Sonny never acted like this any other time I’ve lunged him’, says Patrick. It seems I was the different variable in the equation that equaled Patrick’s rope burned fingers. Oops. But I think my boy was really trying to tell me he was going to be fine. You know, I think the photographic evidence speaks for itself. He is going to be just fine. 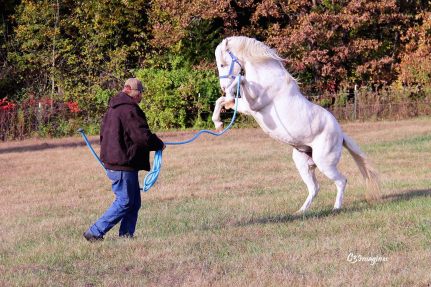