Last Saturday Patrick and I went in search of the bald eagles.  It was Eagle Days at the Chain of Rocks Bridge and people were out in droves trying to spot the eagles swooping in to catch the stunned fish falling over the dam.  It was one of the rare occasions when you can walk across the old bridge from Missouri to Illinois and back tracing an old portion of Route 66.  I fell in love with the water towers in the river. Can you imagine living in one of them like it was a little house? The one that looks like a miniature lighthouse was built in 1891 and you can see the date carved into the stone on the front. The bridge itself mezmerized me with its texture and color; green and rust.  I was instantly in architecture mode.

We spent quite a bit of time just walking the bridge, but eagles were what we were searching for.  Talk on the bridge turned to Alton and Grafton. “The eagles were sitting on the ice flows”, people had said. We were off, heading to Alton. No luck – gulls, gulls, everywhere were gulls. On to Grafton with side trips along the way.

At the Riverlands Migratory Bird Sanctuary I let Patrick take the camera.  Working on his basics of perception and rule of thirds, he got two good shots of the gravel road and some woodland with the reflection of the trees on the ice.  We hit Pere Marquette State Park and Patrick found the charming building by the old oak along the edge of the river. (He nailed it!) We wondered and as the light began to change we decided to call it a day.  Just outside of Grafton, they arrived. It seemed an eagle sat on the ice flow every mile. The shoulder of the road was packed with cars.

At this point in time, I realized Patrick was not giving up the camera. He had caught the bug. He starts hanging out the car door and I’m smacking him on the rump telling him to jump the guard rail, lol.  We hadn’t seen an eagle all day and he wasn’t giving up my camera, so I was darned if we were going to come away without a shot. In the end, he did make the shot. People laughed and thought we were crazy, but it didn’t matter. Patrick new he got a shot and was flying high. 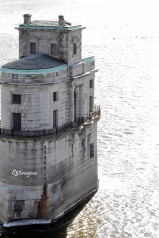 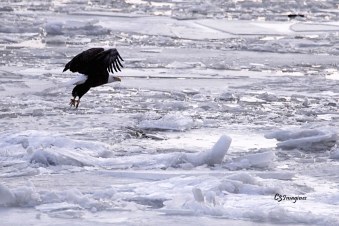